Liz Callaway: Home for the Holidays

Liz Callaway: Home for the Holidays

PLEASE NOTE: Streaming is extended with an encore presentation through January 4, 2021!

Enjoy this magical holiday concert from the comfort of your home. Tony nominee and Emmy winner LIZ CALLAWAY will perform a mix of holiday favorites, beloved Broadway showtunes, share stories about the holidays and her career, and offer a preview of music from her upcoming holiday album, Comfort and Joy. The stream will also include a special behind-the-scenes interview with the artist and a post-show Q&A.

Ms. Callaway made her Broadway debut in Stephen Sondheim’s Merrily We Roll Along, received a Tony Award nomination for her performance in Baby, and for five years, won acclaim as Grizabella in Cats. She also starred in the original casts of Miss Saigon, The Three Musketeers, and The Look of Love. Other New York appearances include the legendary Follies in Concert at Lincoln Center, A Stephen Sondheim Evening, Fiorello (Encores) and Hair in Concert. Regional and international credits include Dot in Sunday in the Park with George, Eva Peron in Evita, Norma Desmond in Sunset Boulevard, the European premiere of Sondheim on Sondheim at London’s Royal Festival Hall, and most recently, starred in the one-person play Every Brilliant Thing.

Liz sang the Academy Award-nominated song “Journey to the Past” in the animated feature Anastasia, Other film work includes Jasmine in the two Aladdin sequels, The Swan Princess and The Rewrite with Hugh Grant.

She received an Emmy Award for hosting Ready to Go, a daily, live children’s program on CBS in Boston. Other TV credits include In Performance at the White House, Inside the Actor’s Studio: Stephen Sondheim and The David Letterman Show.

Her extensive concert and symphony career has included appearances in London, Paris, Iceland, Vietnam, Australia, China and nearly every major city in the U.S. She performs regularly with her sister Ann Hampton Callaway, as well as composer Stephen Schwartz, and has had the great pleasure of singing with Jimmy Webb, Paul Williams and the legendary Johnny Mathis.

Liz has six solo albums: The Essential Liz Callaway, Passage of Time, The Beat Goes On, The Story Goes On: Liz Callaway On and Off- Broadway, Anywhere I Wander: Liz Callaway Sings Frank Loesser, and her first Christmas CD Merry and Bright.  Her numerous other recordings include Sibling Revelry, Boom! Live at Birdland, The Maury Yeston Songbook, A Stephen Sondheim Evening, the complete recording of Allegro produced by the Rodgers and Hammerstein Organization and the original cast album of A Christmas Story.

Learn more about Liz at www.lizcallaway.com.

See Liz Callaway perform “Grown-Up Christmas List” from her 2014 concert at Feinstein’s/54 below.

Reviews:
“Callaway’s clear voice beckons for one to forget the pandemic and focus on the seasonal music one loves every year.”
- Waterbury Republican-American

“It was nice to sit back, enjoy a cup of cocoa, and enjoy a relaxing, welcomed break from the chaotic holiday season.”
- BroadwayWorld Tampa
Seating Chart Group Tickets Accessible Services 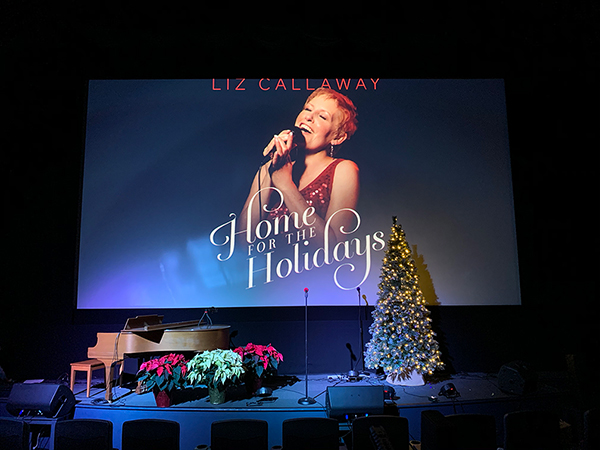